When you enjoin someone to do something, you order or bid him to do it with authority.

If someone is flamboyant, they are trying to show off in a way that deliberately attracts attention.

Something florid has too much decoration or is too elaborate.

A harangue is a long, scolding speech.

An injunction is a court order that prevents someone from doing something.

To opine is to state your opinion on something.

To rant is to go on an angry verbal attack.

To remonstrate with someone is to tell that person that you strongly disapprove of something they have said or done.

A tirade is a prolonged, verbal outburst that severely criticizes someone or something.

Turgid writing or speech is excessively complicated, being filled with too many needlessly difficult words; consequently, such verbiage is boring and difficult to understand.

Marian has turned some of her friends away because she pontificates or preaches too much about health! Just yesterday her friend Alice was eating a strawberry when Marian got right in her face and started pontificating and lecturing her on the ill effects of pesticides. This pontificating made Alice uncomfortable, so she decided to just go home rather than listen to Marian’s heavy sermon. Marian seems to think she’s right all the time, so she pontificates and always seems to think her opinion is the only one that matters.

Quiz: Try again! What does it mean to pontificate?

Cate's Ponytail Tiff Cate often got in tiffs, or fights with her mother, who always pontificated about why it was best for Cate to always wear her hair in a ponytail: "It won't get in your way, Cate!" she would always pontificate.

A pontifex, or “high priest,” was the “maker of a bridge” between his “flock” and the divine. When a high priest pontificates, he “makes” the rules which people will listen and obey unquestionably. 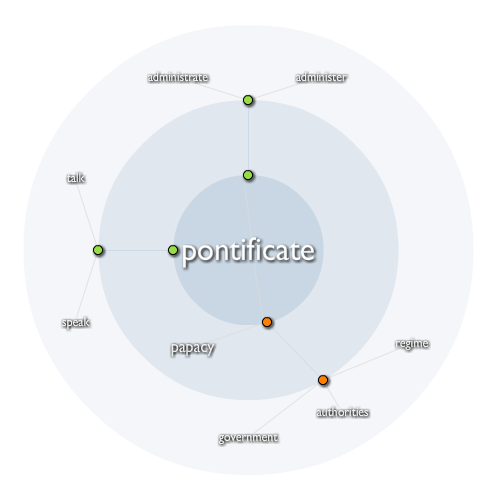