An acolyte is someone who serves a leader as a devoted assistant or believes in the leader’s ideas.

If you are amenable to doing something, you willingly accept it without arguing.

Blandishments are words or actions that are pleasant and complimentary, intended to persuade someone to do something via a use of flattery.

Someone who is contumacious is purposely stubborn, contrary, or disobedient.

If you behave with deference towards someone, you show them respect and accept their opinions or decisions, especially because they have an important position.

If someone is fractious, they are easily upset or annoyed over unimportant things.

When you genuflect, you show a lot more respect to something or someone than is usual or sometimes necessary.

If people try to ingratiate themselves with you, they try to get your approval by doing or saying things that they think will please you.

When you kowtow to another person, you flatter her excessively or act in a very submissive way to please her.

Obeisance is respect and obedience shown to someone or something, expressed by bowing or some other humble gesture.

A recalcitrant animal or person is difficult to control and refuses to obey orders—even after stiff punishment.

Refractory people deliberately don’t obey someone in authority and so are difficult to deal with or control.

A restive person is not willing or able to keep still or be patient because they are bored or dissatisfied with something; consequently, they are becoming difficult to control.

If you say that someone is servile, you don’t respect them because they are too obedient, too agreeable, and too willing to do anything for another person.

If you are subservient, you are too eager and willing to do what other people want and often put your own wishes aside.

Sycophants praise people in authority or those who have considerable influence in order to seek some favor from them in return.

An unctuous person acts in an overly deceptive manner that is obviously insincere because they want to convince you of something.

Igor’s endless bowing, sickly smiles, and other obsequious ways of behaving towards the master of the house annoyed other servants. They all knew that Igor was merely trying to win favor by behaving with such overly dutiful, too respectful, and obsequious motions. Igor rushed upstairs at dawn to make sure that his employer’s coffee was as hot as he wished, and he also hung upon every request with obsequious, flattering, and simply excessively detailed attention.

Quiz: Try again! When is someone acting in an obsequious way?

When one is acting in an obsequious fashion, one “follows towards” another in a way pleasing to the other person, often by falsely flattering him. 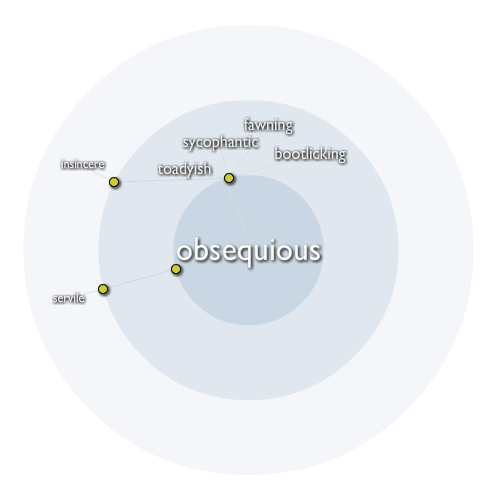