Circumlocution is a way of saying or writing something that uses too many words, especially in order to avoid stating the true meaning clearly.

If someone is flamboyant, they are trying to show off in a way that deliberately attracts attention.

Something florid has too much decoration or is too elaborate.

When something is implicit, it is understood without having to say it.

When you are acting in a melodramatic way, you are overreacting to something in an overly dramatic and exaggerated way.

Something meretricious seems good and useful; in fact, it’s just showy and does not have much value at all.

If you are pretentious, you think you are really great in some way and let everyone know about it, despite the fact that it’s not the case at all.

Something that is succinct is clearly and briefly explained without using any unnecessary words.

Turgid writing or speech is excessively complicated, being filled with too many needlessly difficult words; consequently, such verbiage is boring and difficult to understand.

Something that is verbose, such as a speech or article, contains too many words.

Elizabeth found Edward’s invitation to the movies to be too flowery and grandiloquent. There really was no need for him to grandiloquently recite the request in rhyme, or for him to wear a top hat and speak in such a fancy way with such big words! Furthermore, his grandiloquent or overly formal expression embarrassed her since he read his poem in front of her soccer team at practice. It was only a date to the movies, after all, not a grandiloquent, impressive marriage proposal!

Quiz: Try again! What is an example of grandiloquent speech?

Grandiose Eloquence Howard was too grandiose in his attempts to sound eloquent and sophisticated; he was being grandiloquent.

One who is prone to being grandiloquent is often “in a state or condition of speaking in a great, lofty, or powerful” way. 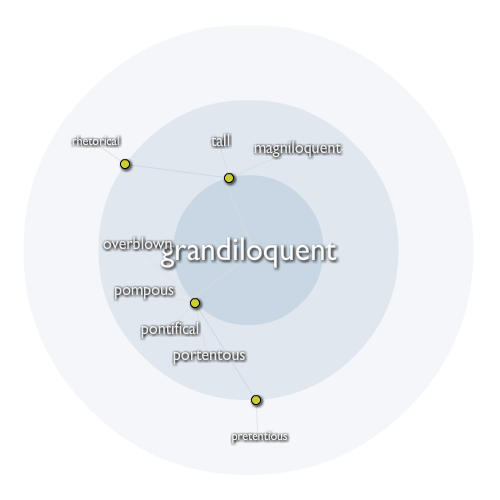